Based on my lab experiences, I had an idea in mind for how I would purify CBD. Now it is time to put my ideas to the test! 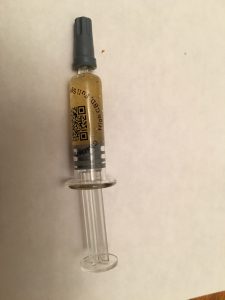 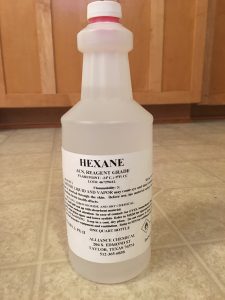 Having never done any chemistry outside of a university or industrial setting, I was completely unfamiliar with how to get supplies on my own. I was thinking of ordering solvents online, but by pure luck, I stumbled upon a vendor in downtown Ypsilanti, right off of Michigan Ave, while I was getting some takeout. Right as I was about to get in my car and drive home, I saw a storefront display with a bright blue solution in a beaker stirring. I was really curious, so I went inside to see what was going on. The store, ambiguously named Ypsilanti Oil Company, had a bunch of chemistry supplies and equiptment. Located across from the Ypsilanti Farmers Marketplace, they are an “Aromatherapy Service” company, the idea being that someone would buy herbs from the farmers market and then be able to get the supplies to go home and make their own extracts. I saw that they had hexanes, so I bought a one quart (946 mL) bottle for $42.40.

Excited about my spontaneous purchase and ready to try some things, I obtained 1 gram of a 70% CBD extract from a local “provisioning center” for $60, and ordered a 12 pack of 1 dram (3.7 mL) vials from Amazon for $7.

For a spatula, I used a knife from a pumpkin carving toolkit because it was narrow enough to fit into the CBD sample and also the vials. 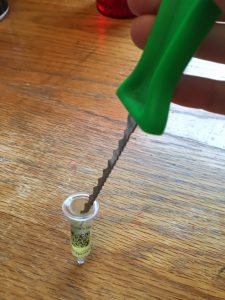 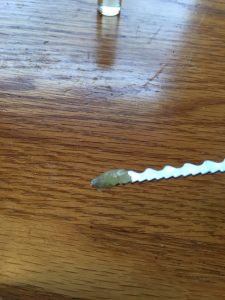 I did not have a scale or syringes, but I would estimate that I dissolved approximately 200 mg of the CBD sample in 1.5-2 mL of hexanes. In other words, I filled the 1 dram vial half full with hexanes, and then added two “scoops” like the one shown above, which was about 1/5 of the 1g sample. I did not use any heat to dissolve the sample, just a bit of stirring for a few minutes with the knife, until the solution was homogenous and clear. I did notice that there were some “dirt” particles that did not dissolve, so if I were to do this again on a larger scale, I would probably add a filtration step before growing the crystals. 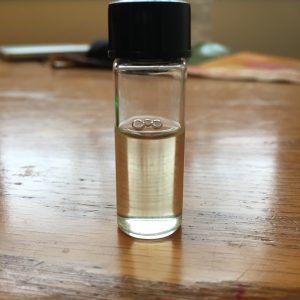 I put the vial, tightly capped, in my freezer overnight. 24 hours later, I found some clear crystals! 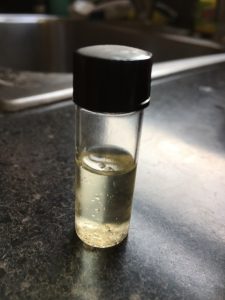 I waited an additional 24 hours to see if I could get more crystal growth, but it looked about the same the next day. I then waited for the solution to warm up to ambient temperature and decanted off the excess solvent, leaving behind the crystal solids shown below. For the decanted liquid, or the mother liquor, I am evaporating to increase saturation and re-freezing to see if I can grow a second batch. I plan on testing the crystal samples along with the original one to determine the extent of purity improvement. Also, in the future, I will look into how to get the best yield and mass recovery. 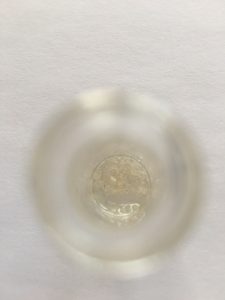 Overall, I was able to grow some CBD crystals using only one solvent (hexanes) and without any heat.

Contact us at info@oriongmp.com to discuss how CannaChemist can help your organization refine chemistry processes.