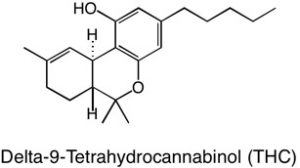 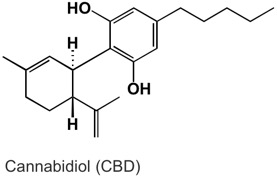 Not all solids are created equal. Some molecules can be “more solid” than others. What does this mean? Well, certain kinds of functional groups on the molecule, such as the alcohol, or –OH group, are like little magnets that bind the molecules to each other and make them clump up as a solid. Sucrose, or table sugar, has eight alcohol functional groups. This gives it a crystalline structure and the ability to dissolve in strongly polar solvents such as water. The more –OH groups you have, relative to the overall molecule’s size and other properties, the more solid character the molecule possesses. CBD, or cannabidiol, has two alcohol groups, that is why it is called cannabi-di-ol, meaning “two alcohols”. On the other hand, THC only has one alcohol functional group. The other oxygen is an ether, which is less polar than an alcohol because it is not a hydrogen bond donor.  Other portions of the molecule including the terpenoid portion, the benzene ring, and the pentane tail contribute hydrophobic character to the molecule, so even though alcohol groups are present, neither of these cannabinoids are polar enough overall to dissolve well in water, but organic solvents, such as ethanol and methanol will dissolve them more readily. 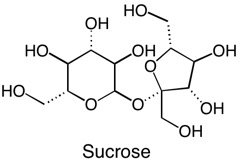 THC and CBD are both soluble in alcohol solvents, which is very useful for extraction, but for a recrystallization procedure, a solvent that is a little more selective about what it can dissolve is necessary. A less polar solvent, such as pentane, is needed so at the end of recrystallization the final product can be filtered and collected as a solid. Pentane is just a straight chain consisting of 5 carbons, a very nonpolar solvent. At room temperature, it doesn’t dissolve the cannabinoids well. For recrystallization, temperature control is the trick. When the pentane is near its boiling point (36C), it can actually dissolve the cannabinoids just from that extra input of kinetic energy, and when the solution cools back down to room temperature, which molecule do you think will precipitate first? The CBD!

Articles by CannaChemist are focused on concepts surrounding cannabis chemistry, both regarding the 400+ molecules present in the cannabis plant, and the chemicals typically used for processing and manufacturing cannabis products. These writings are for the purpose of educating and advising those that are striving to achieve GMP standards in the cannabis industry. The intention is that by increasing the knowledge of chemistry principles, you will be able to develop safer, more efficient, reliable, and inventive procedures for your cannabis manufacturing company.

No procedures or ideas developed based on these writings should be attempted without the same safety precautions that would be employed in an industrial or academic setting.